BlogCATV networks: how have cable networks for TV and Internet evolved over the years?

CATV networks: how have cable networks for TV and Internet evolved over the years?

Beginning in the mid-20th century in the US, the development of cable CATV networks (Community Access TV) was intended to address TV distribution challenges that could take place in multiple scenarios owing to reception conditions.

The seed of CATV network distribution was the use of a receiving antenna installed on a hill for the subsequent distribution of signal through cable to final users. Later on, this technology was applied to buildings, so facades were no longer abounding with individual antennas for collective distribution through coaxial cable.

A few years later, CATV distribution networks grew in popularity in the US as well as in many other countries across the globe – like Spain, to name one example. Note that the first law concerning Collective Distribution in Spain – today’s Common Telecommunication Infrastructures (ICT) – was Act 49/1966 of July 23rd on collective antennas, which approved the “Regulation on interference in sound and television broadcasting” in 1966. 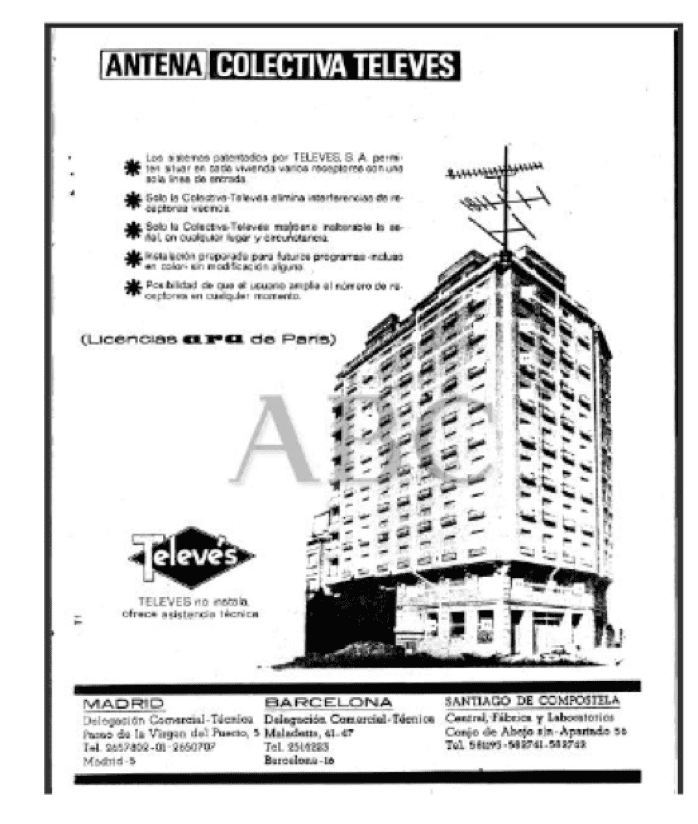 Innovation of CATV networks in the 60s

In the 60s, different innovations changed CATV networks: first, amplifiers – which are required to regenerate signals – were replaced by transistorized amplifiers; and then, the return band was introduced into them, so CATV networks became bidirectional networks. A downstream and an upstream channel could be, hence, distinguished.

The fact of separating a downstream channel from an upstream channel prompted the development of data-distribution technologies in coaxial networks. This brought about new applications and unidirectional distribution (broadcast) of TV signals – which were first analog and then digital. During the 90s, data transmission standards on CATV networks were developed based on them both – mainly DOCSIS.

Let’s go a bit deeper into the evolution of CATV networks: during the late 80s, HFC architecture (Hybrid Coaxial Fiber) was introduced into them. HFC networks combine fiber optics with coaxial cable as main supports for signal transmission. The first one is in charge of conveying signal from the backbone network to the nodes. The coaxial part corresponds to the distribution network and is in charge of sending the signal to the clients.

If you are rolling out a distribution network from the ground up, fiber optics offer advantages over coaxial cable in terms of capacity, immunity against interference, and low losses in the distribution between the headend and the final user. Besides, the amplifiers of CATV networks consume energy, so the transition towards fiber involves significant savings.

If the coaxial-cable network is already deployed instead, the major advantage is that the rolling-out cost is already recovered. To make up its deficiencies, you can replace the coaxial trunk distribution network with fiber (HFC), and leave the coaxial for the headend and internal distribution in the user’s home as shown in the figure below:

Later, in the 90s, the non-profit consortium, Cable Labs, developed DOCSIS standard, which was first launched in 1996 (see table).

DOCSIS specifications include a comprehensive communications infrastructure for IP connections, several layers and bidirectional data transmission over the cable network. Further upgrades were developed in subsequent versions, such as channel aggregation, dynamic service quality, more efficient modulations, increase in the available bandwidth – both in upstream and downstream link, etc. This all has sparked off a considerable growth of the network capacity.

CATV networks are still an important TV and distribution medium in many countries.
The existence of data distribution standards (DOCSIS) evolved over time, very efficient digital modulations (QAM), as well as headend, optical distribution and reception equipment (nodes, mininodes) make them a very attractive type of networks for television and data distribution.

Televes has all the necessary equipment for CATV deployments encompassing every part of the network: amplifiers, nodes, mininodes, optical equipment, etc. You can discover our advanced solutions in TV distribution here.

Types of Internet Cables: How to Choose the Best One for Your Installation

Lighting for sports facilities: all you need to know

The Built Environment Sector and Its Smart Transformation

How to Check the Antenna Cable Connection in 3 Steps